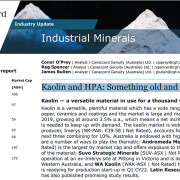 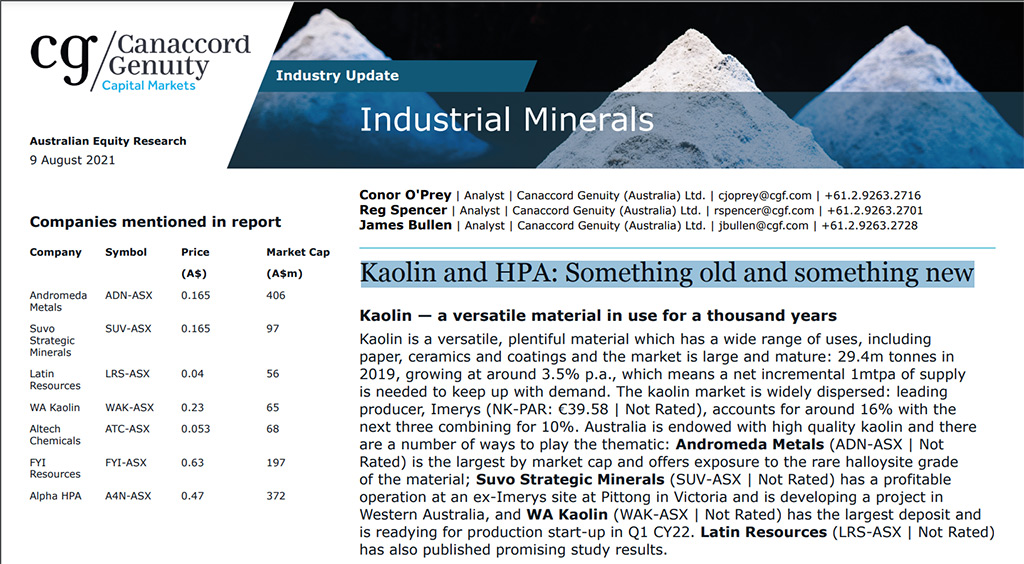 Read the full paper as a PDF.

Kula Gold made a significant discovery of Kaolin and Halloysite during RC Drilling on the Airfield Gold Project tenement in April 2021, when drilling intersected thick >42m vertical kaolin clay development over the 300m drilled length, creating the Boomerang Kaolin Prospect.

And on August 17, 2021 the company announced SEM imaging at the CSIRO had confirmed the qualitative nature of Halloysite discovered at the project.

Excerpt from the Research below.

Kaolin and HPA: Something old and something new.

Kaolin — a versatile material in use for a thousand years.

Kaolin is a versatile, plentiful material which has a wide range of uses, including paper, ceramics and coatings and the market is large and mature: 29.4m tonnes in 2019, growing at around 3.5% p.a., which means a net incremental 1mtpa of supply is needed to keep up with demand.

The kaolin market is widely dispersed: leading producer, Imerys (NK-PAR: €39.58 | Not Rated), accounts for around 16% with the next three combining for 10%.

The performance of lithium-ion batteries (LiBs) is substantially improved by the application of high purity alumina (HPA) to the separator, slowing battery degradation and materially improving discharge periods. HPA is a very specific grade of alumina with a minimum purity of 99.99% (4N). Standard alumina from the Bayer process does not lend itself to LiB or other high-end electronics applications (e.g. LEDs) due to the presence of sodium as a contaminant.

Therefore, another route to HPA production is required and kaolin offers potential as a starting material.

Alumina, like kaolin, is an established industrial mineral but emerging applications in electronics and LiBs require ultra-pure grades, which therefore calls for a re-evaluation of the HPA production process.

In a market, amounting to tens of thousands of tpa, raw aluminium metal has been the expensive starting material for HPA production but Kaolin offers a potential solution as a long-term, cost-effective feedstock.

Industry forecasts project the HPA market to grow at 17% p.a. over the next seven years (Figure 5), suggesting that supply will need to grow to match that demand.

Kaolin links the two markets together, but we believe they should be analysed separately. Whilst ATC and FYI have their own deposits, they do not plan to be full-time kaolin producers: ‘campaign’ mining will supply several years’ worth of HPA feedstock.

Kaolin production and processing tends to be relatively straightforward and there is a ready and growing market for the material. SUV, WAK and ADN either have, or are in the process of negotiating, offtake agreements for their products, often with distributors or users in the Asia-Pacific region. Capex is relatively low (tens of millions of dollars) and payback periods are fast, mostly measured in months.

The HPA market enjoys very dynamic growth potential over the next five years at least. There appears little dispute about the benefits of HPA in LiBs and LEDs, so the challenge remains for the industry to meet the demand. The projects tend to require significant capex running to hundreds of millions of dollars, whilst HPA pricing is projected to be an order of magnitude higher than for kaolin.

We would recommend reading the entire paper here.

Disclaimer: Canaccord Genuity is the global capital markets group of Canaccord Genuity Group Inc. (CF : TSX). The recommendations and opinions expressed in this research report accurately reflect the research analyst’s personal, independent and objective views about any and all the companies and securities that are the subject of this report discussed herein. 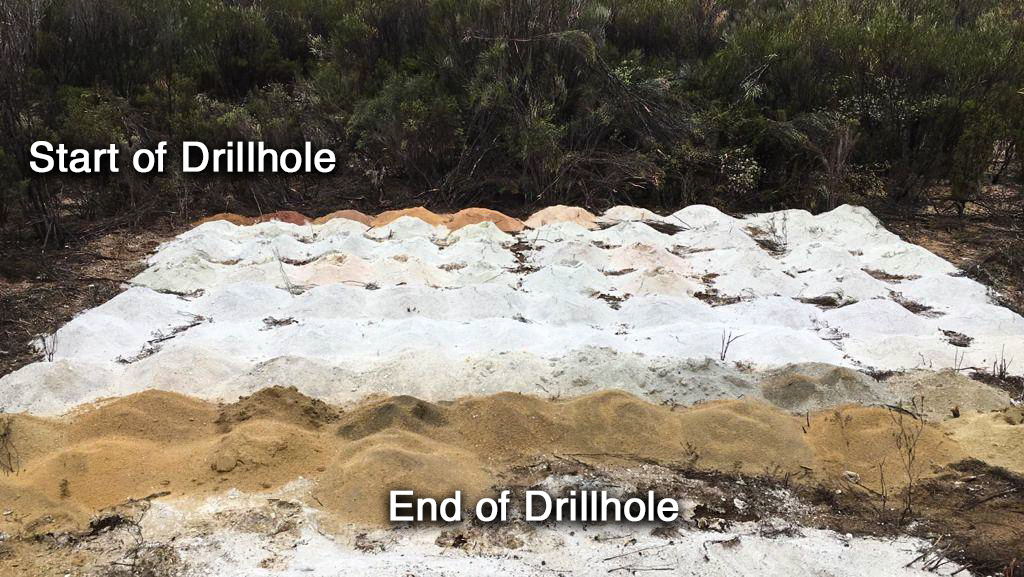 Figure 2. White Kaolin Clays at the Airfield Project from April 2021

Kula Gold made a significant discovery of Kaolin and Halloysite during RC Drilling on the Airfield Gold Project tenement in April 2021, when drilling intersected thick >42m vertical kaolin clay development over the 300m drilled length, creating the Boomerang Kaolin Prospect.

The company believes the Exploration Target for planned follow up RC Drilling in August 2021 is between 30 and 100Mt of kaolin material based on the current thickness and the nature of the process that forms the wide zones of kaolin in weathered granite. It lies in a favourable location, being ~25km from the Kalgoorlie water pipeline and Highway 94 Perth to Kalgoorlie, and 42km to the Southern Cross rail yard. Whilst Kula’s results are preliminary, the Company believes that the initial assays are significant in grade and extent and require further drilling. (ASX announcement 13 July 2021). 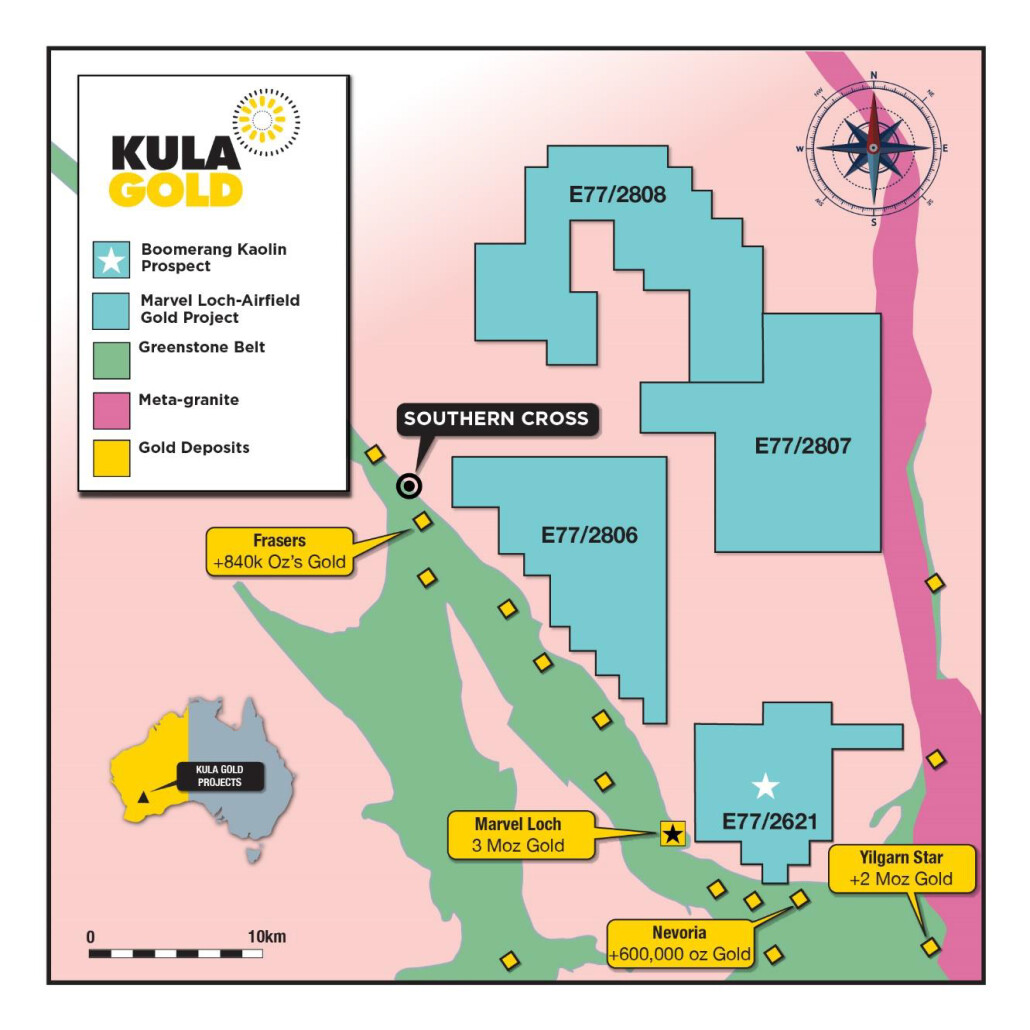