⛏️ Kula Gold Limited is pleased to announce the completion of diamond drilling at the Crayfish Gold Prospect at the company’s 100% owned Marvel Loch-Airfield Gold Project. 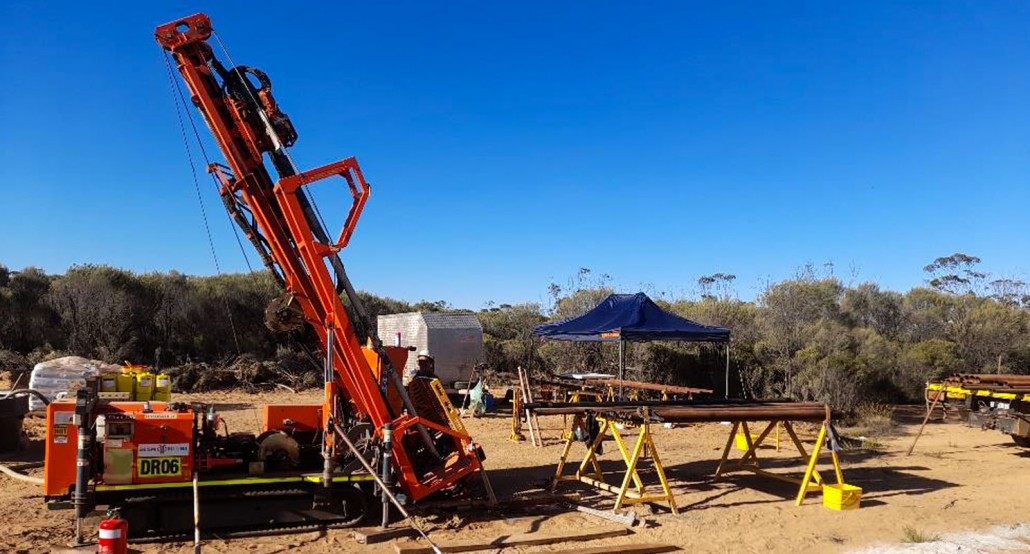 Collar Locations are provided in Figure 2. 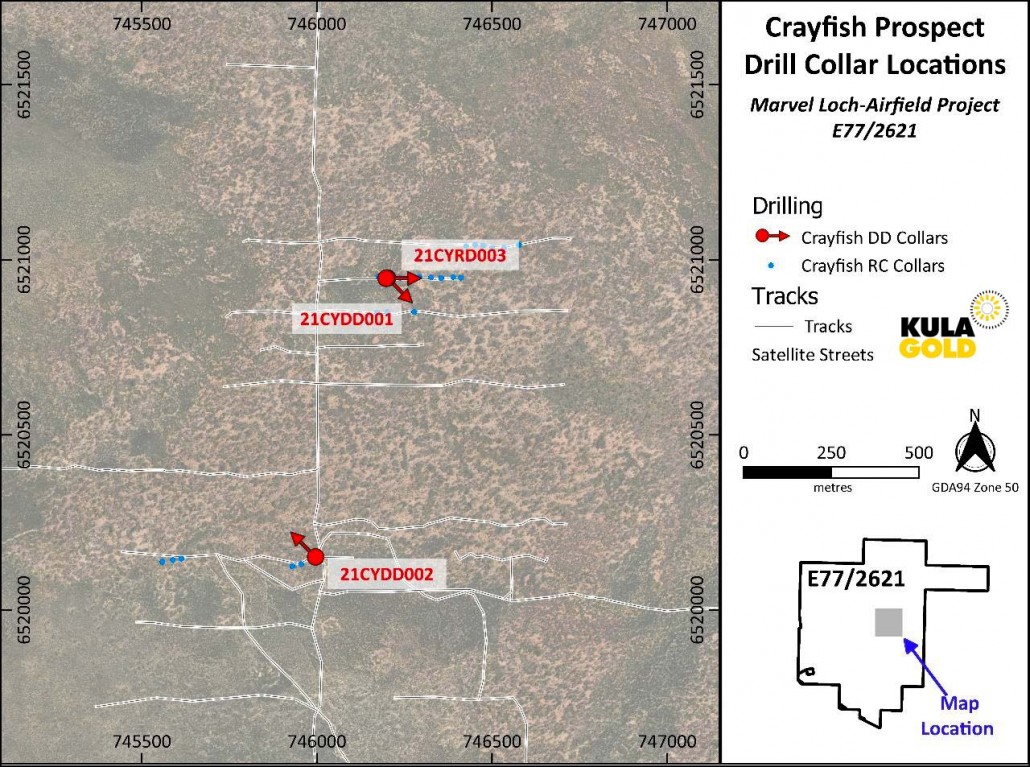 The reverse circulation (RC) drill program on E77/2621 discovered previously unmapped amphibolite (greenstone-refer ASX release 2nd July 2021) within the Ghooli Dome, previously mapped by GSWA as granite. This program warranted a follow up diamond drilling program to obtain oriented structural and lithology data for the next stage of drilling and expand the Company’s geological knowledge of the area given the largest producing gold mines within the prolific Southern Cross region are hosted by regional greenstone belts.

Diamond drilling also aimed to test the potential extension and orientation of the low-level gold anomalism returned in 21CYRC004 and 21CYRC005 (see Figure 3) with 21CYRD003 drilled as a diamond tail to original RC hole 21CRYC003, extending the hole by 80.5m (to a total downhole depth of 145.8m). Orientation readings taken from 21CYRD003 were used to design a 2nd drill hole targeted to intercept the structures, veins, and contacts at a more optimal angle. This follow up hole, 21CYDD001, was drilled from surface on the same drill pad to a total downhole depth of 141.4m (including the 54.4m mud rotary precollar).

Figure 3: Cross section through existing RC holes at Crayfish along 6 520 950mN showing the extension of 21CRYC003 and one of the potential orientations for the low-level gold anomalism.

21CYDD002 was collared approximately 400m south, targeting the strongly quartz veined amphibolite intercepted in RC holes drilled in the April Program (21CYRC015 – 21CYRC017), and was drilled to a total depth of 141.2m (including a mud rotary pre-collar of 57.7m). Representative photographs of the amphibolite, silica-altered amphibolite and quartz veining is provided in Figure 5.

Geological interpretation of the newly acquired data is ongoing and results will be reported as received and analysed.

For more details on the drillholes please download the full PDF

The information in this report that relates to geology and exploration is based on information compiled by Mrs. Melanie Hickman, a Competent Person who is a member of the Australian Institute of Mining and Metallurgy and the Australian Institute of Geoscientists. Mrs. Hickman is a Geology and Exploration Consultant who has been engaged by Kula Gold Ltd. Mrs. Hickman has sufficient experience, which is relevant to the style of mineralisation, geology and type of deposit under consideration and to the activity being undertaken to qualify as a competent person under the 2012 edition of the Australasian Code for Reporting Exploration Results, Mineral Resources and Ore Reserves (the 2012 JORC Code). Mrs. Hickman consents to the inclusion in the report of the matters based on her information in the form and context in which it appears.

About the Company
Kula Gold Ltd (ASX: KGD) is a West Australian gold exploration company focussed on large land positions and structural geological settings capable of hosting ~1m oz deposits.
The company has various gold, copper, nickel, PGE, halloysite and kaolin projects across the Southern Cross region including Marvel Loch, Rankin Dome and Westonia, as well as at Brunswick and Kurnalpi-Lake Rebecca. The company has a history of large gold resource discoveries with its foundation Woodlark Island Project in PNG.
Contact the Company Secretary on Tel: +61(08) 6144 0592 or via cosec@kulagold.com.au