The assay results from those rock samples showed Cu up to 0.35% as chalcopyrite, confirming the presence of copper-bearing sulphides in the project area.

“This is an exciting early-stage development on our Brunswick project, which was acquired for Julimar style mineralisation. Our geological team have been walking the ground for a few months now and this work has identified the geological potential for another two styles of mineralisation (Epigenetic gold mineralisation and Archean Cu-Au mineralisation),” Chairman Mark Stowell commented. 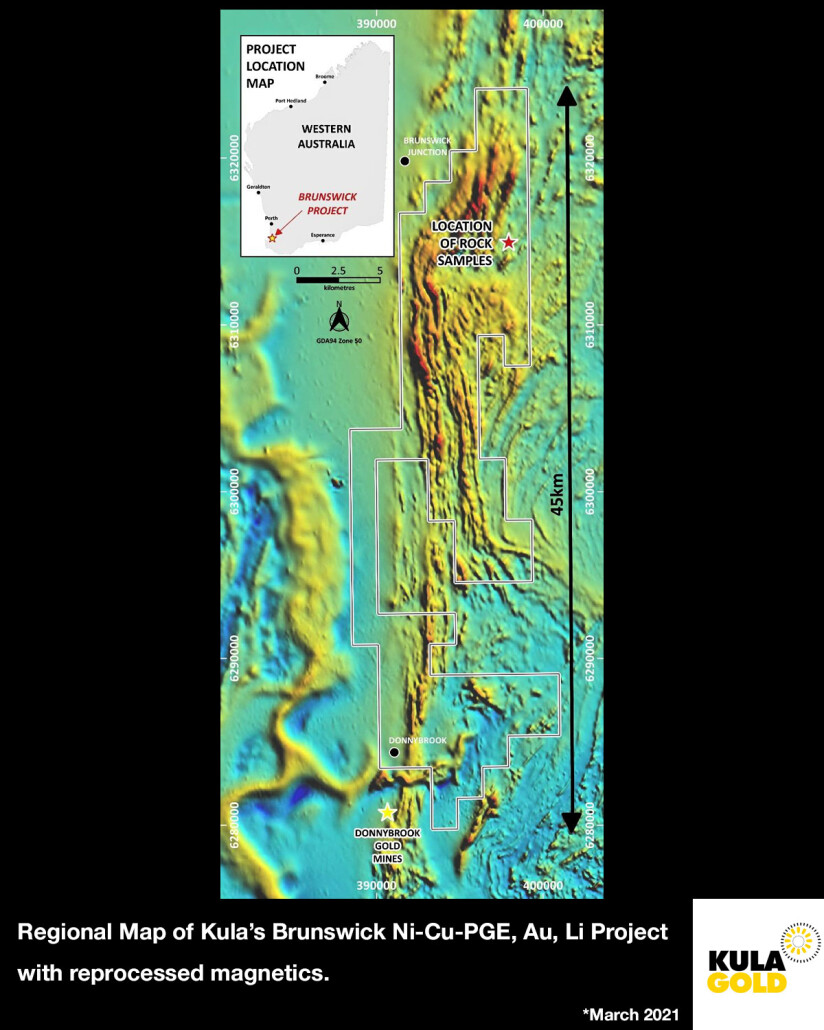 Fieldwork by the company’s geological team has identified potential for three types of mineralisation at the Company’s ~250km² Brunswick project and these are now the focus of exploration work:

3. Archean Cu-Au mineralisation analogous to Newmont’s Boddington Copper-Gold Mine 75km NE which is one of the largest gold mines in the world, producing approximately 700k oz Au and 35kt Cu p.a.

Current activities include targeted soil sampling underway at Brunswick, with a total of 228 samples collected to date.

Samples will be assayed for Au, Pt and Pd by fire assay and multi-elements by ICP-MS.

Approximately 200 of the above samples will be assayed for multi-elements at Intertek Labs Perth to compare the results for the same samples from the Portable X-Ray Fluorescence machine (PXRF). This will facilitate using the PXRF for multi-element analysis in the ongoing soil sampling programs at Kula’s projects for significant cost and time savings in future sampling and analysis (ie immediate on ground results for immediate follow-up as opposed to the 5-6 week lag for lab assays and new field trip).

All ongoing soil samples will be assayed for Au, Pt and Pd (and Li, where applicable) at Intertek or other labs.

Results from exploration will be reported in due course.

Competent Person:
The information in this announcement that relates to exploration results is based on information compiled by Company geologists and reviewed by Mr Adam Anderson, in his capacity as the Exploration Manager of Kula Gold Limited. Mr Anderson is a Member of the AUSIMM and AIG and has sufficient experience which is relevant to the style of mineralisation and type of deposit under consideration and to the activity which he is undertaking to qualify as a Competent Person as defined in the 2012 JORC Code. Mr. Anderson consents to the inclusion in the report of the matters based upon the information in the form and context in which it appears.